skip to main | skip to sidebar

Twitterature: The World's Greatest Books in Twenty Tweets or Less 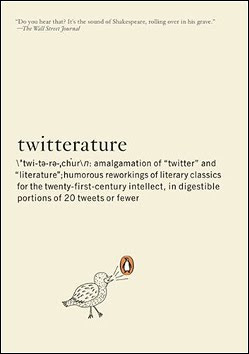 Have you ever used Cliff Notes to review for a test? Well, Twitterature, by Alexander Aciman and Emmett Rensin, is the Cliff Notes of the Tweeting world, though I do not advise you to use the book to help you study for a test. It is an irreverent look at great works of literature from the point of view of the protagonists. The twist is that the protagonists have a Twitter account.

That’s right. The protagonist tweets the whole book in 140-character tweets using no more than twenty tweets total. Don’t worry. A glossary is included in the back of the book for the Twitter uninitiated members among us. This is very useful for those who are still wondering about the value of tweeting in the first place.

Twitterature brings to light the classics in a unique manner. With wit a heavy dose of satire, Aciman and Rensin lay out the classics – one 140-character tweet at a time. It is a brilliant idea which leaves many writers wondering, “Why didn’t I think of that?!”

Twitterature lays out the classics one tweet at a time answering the question, “What was Hamlet trying to say?” in a manner filled with wit and humor.